What is the GunNoook Community?

GunNook strives to be more than just a distributor of high quality goods and wares. We want to connect with our members and clients. Whether it be an organization, distributer, or an individual person. We want to make sure you’re informed on not only products of interest, but also events, how-tos and others happenings of interest.

One of the ways we do this is with GN Reviews. Get in depth reviews on the very products you’re looking to acquire. We stand behind our non-biased opinions, leaving it up to you if it’s the item you’ve been looking for. We also have an extensive media library of how-tos and so much more. The community side of Gun Nook is 100% free and will always remain so! Not to mention this free membership comes packed with ways to save money and get free shit! Who doesn’t like free shit? I know we do! Here (To your left) are just a few hot spots among the community you may find of interest until you become more familiar.

Get your next custom PVC morale patch made here! We guarantee the cheapest price because we cut out the middleman. If you can find a cheaper price, we'll match it GUARANTEED. Velcro hook backing is included on all patches, unless otherwise specified.

In other words, there are no cheap tricks or hidden fees provided you have your own artwork. Not an artist? Not a problem, we can help with that too!

The best part, 100% customer satisfaction is guaranteed. We will work with you through the entire process to ensure you get the morale patch you envisioned. We have the lowest mold fees in the industry and in some cases it's even waived.

Here at GunNook, we respect and support those who put their lives at risk to help protect others. This product, like any other product on the GunNook network, qualifies for discounts for military both past and present, law enforcement, and first responders. Please inquire within original quote for more details.

Since 2011 Gun Nook has been at the forefront of FFL listings. Guaranteeing 1st, 2nd, and 3rd page search results. As the years passed we began to see a huge problem. FFL listing are simply that; names on a list. Well, not anymore! We’re all about community here at GN and we want to make every part of Gun Nook as memorable as possible. As such, the FFL portion of Gun Nook is undergoing massive development packed with features and tools for dealers and gun buyers alike. (Targeted Release Date Spring 2018) Until then the current FFL portion is live and active.

Are you an FFL dealer and want to submit your information to Gun Nook? If so please fill out this simple form and you will be contacted shortly.

A Labor of Love and Honor

I made these blog posts back when my grandfather passed away. I can’t say enough about the hard working, kind, caring, generous, and strong man he was. He was one of the strongest influences in my life, I would not be the man I am today if he wasn’t around to help teach me what is right. The world is a poorer place for him having passed. He was a husband, a father, a grandfather, a great-grandfather, and a hero. And I’m doing my very best to honor and remember him.

He served in the US Army, 1st Cavalry Division, 82nd Field Artillery Battalion, “A” Battery in Japan and Korea. He was enlisted from 1949 to 1953. He exited service at the rank of CPL with an honorable discharge and a silver service star with arrowhead device. He came home to West Virgina, started a family, and worked in the coal mines.
I have a rope-bound book that was given to members of his unit in Japan titled :
“82nd Artillery Battalion, Organization Day, June 6th 1950, Camp Whittington, Kagohara Japan”

This book has unit photos stapled in it and rosters of the units. The photos of “A” Battery with my grandfather and a couple more are missing. I have been trying to find any info on how I can replace or get copies of the photos in it. This would mean so much to me and my family.

Above: This is the cover of the book. The gate leading to Camp Whittington. Thanks to David A. Smith and Daniel P. Gillotti.

Above: Pages 2-6, History of the 82nd Field Artillery Battalion

Above: The roster and photo of the 82nd FA BN officers.

Above: HQ Battery roster and photo. 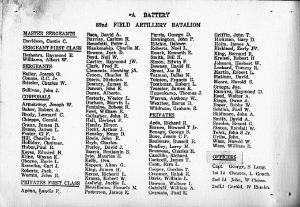 Above: Roster and photo of “A” Battery. This is the Battery my grandfather was in. Thanks to David A. Smith and Daniel Gillotti.

Above: The roster and photo of “B” Battery.

Above: SV B2 Battery roster and photo.

Above: This is what I believe is the main camp building or barracks.

Above: These are a couple of photos of awards being received. The one on the left is an award for best “Day Room”. The photo on the right is a plaque with the Battalion’s crest on it being awarded.

The next page of the book is marked “Autographs”, the last page is blank. There are no autographs in the book though.

Thank you for viewing, I hope you enjoyed this great piece of history, in honor of my grandfather and all those who served or are still serving.